As we become accustomed to working-from-home, we have found the need for PC components that would last for the next 3-5 years as we feel that buying a PC isn’t an everyday expense for everyone but an investment for most. Though there are enthusiasts that take the opportunity to upgrade for better performance while others require it for extra render speeds.

After the recent release of AMD’s Ryzen 5000 series, we took the opportunity to create a commission build as supplies might not be able to keep up with the demand from both corporate and consumer purchases resulting in definite price hikes from retails stores. As with previous releases from both CPU brands, Intel and AMD, another foreseen outcome would be the importation of components from neighbouring countries like China, Singapore, and Taiwan. Since these were bought from unauthorized channels, local brands would likely not honour warranty for such.

After the launch of the Zen 3 Architecture, AMD has now become the better choice for the performance it gives. With its 12-core/24-thread configuration, it gives a boost in performance for gaming and productivity. Due to the shortage in supply, the price was originally set at ₱30,250 but are being sold now for ₱38,300. The price difference versus Intel’s Core i9-10900k can be justified by the performance it is able to provide.

The performance level of the Ryzen 9 5900x is not far off from the previous generation’s Ryzen 9 3950x which is the highest of the last generation. We see a huge jump versus the Intel Core i9-9900k at 5.0GHz  and should also show in single-core performances.  This would be best for video editors and multimedia content creators as well as those  who want to stream and game at the same time. 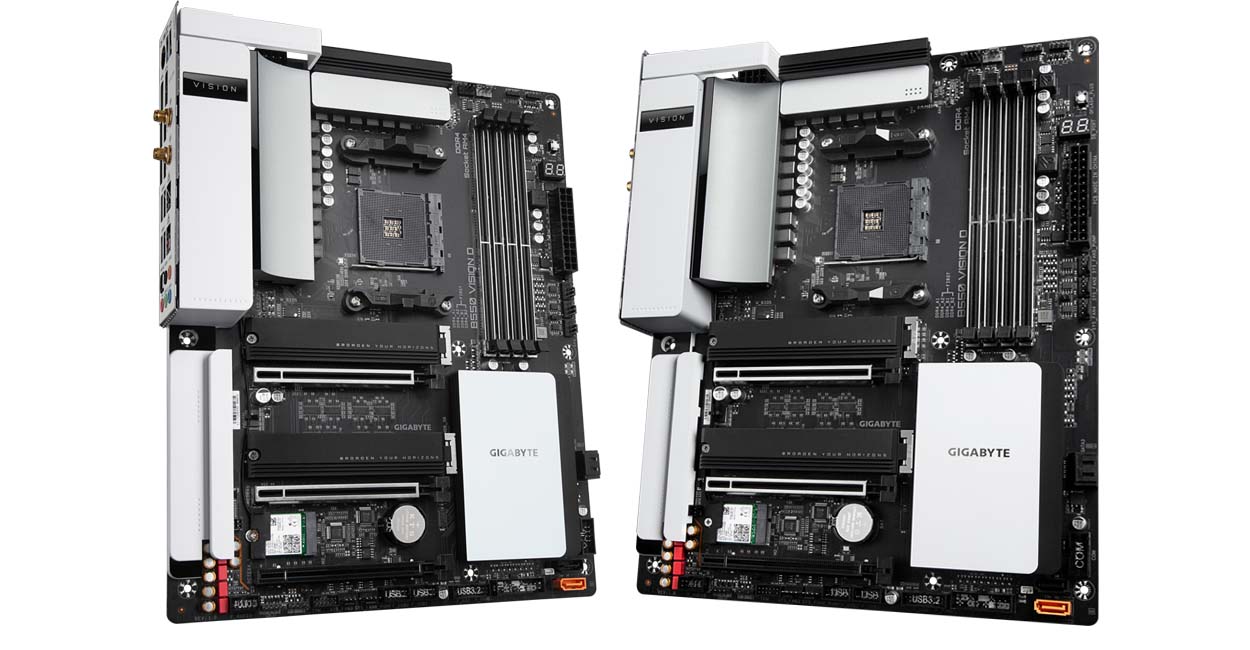 The Gigabyte B550 Vision D is currently the top choice in Gigabyte’s selection of motherboards for content creators. providing an option for Thunderbolt 3 that creates one compact port that delivers the fastest connection to any dock display or data device. It is currently priced at ₱14,230.

The G.Skill Trident Z Neo was currently the most affordable 3600MHz RAM available upon purchase. Since this is a PC that is meant for livestreaming and renders, we chose the 16GBx2 option for upgradability purposes.

Following the White Themed Build, we opted to go for the Gigabyte RTX 3080 Vision OC to pair with the motherboard. At the moment, this is the top of the line graphics card available in the market due to the availability of the 3090s and AMD’s much awaited 6900XT launch. With the 10GB DDR6 VRAM on this graphics card, the render speeds would not only be the optimal choice but is also aesthetically pleasing.

In terms of storage, it is very much a preference but we highly recommend an NVMe for the OS along with a 1TB (or more) HDD. You can check out our article regarding choosing the right SSDs for your builds. One of the reasons we chose to go with 2x 500GB NVMe is because these would be purely used for rendering and livestreaming and RAW files would be stored elsewhere. Generally, companies would keep a NAS or a larger storage server for data saving. You can check out a review on the A2000 here.

We consider power supplies to be an investment more than something that you shouldn’t really bother about. Therefore, cheaping out on your PSU could cause you more problems and expense in the long run versus tightening your budgets in the longs run. PSUs now have a warranty of 5-10 years giving you more time to reuse compared to other components. The recommended wattage for our build is around 700 to 750W but we chose to go with 1000W for upgradability. Seasonic has been a go to brand for most PC Builders thanks to their wide range of power supplies with different 80+ certifications.

The iCUE H100i comes with two 120mm  Corsair ML 120 PWM fans that can hit up to 2400 RPM. These same fans are able to achieve Zero RPM mode which are shut off during lower CPU loads. In terms of cooling, the H100i is one of the better-performing 240mm AIOs in the market which was recently launched. This has been tested and we were able to achieve close to 80°C  on maximum load and about 40°C  on idle considering how hot AMD processors are likely to go.

We find a scarcity of cases in the market that even the recently launched cases have not yet arrived in the Philippine retail stores. As such, we chose to go with our trusted Corsair case for a price of ₱5,150

For our benchmarks, we use CapFrameX to capture FPS and gaming analysis. Of course, we updated our Windows to the latest build version. Readings and temperatures are recorded using HWMonitor and for our main monitor, we use Lenovo Legion’s Y27GQ-25 1440p monitor for testing.

If you’re a gamer, you’d definitely be following one or two free-to-play title and these gaming benchmarks we provided are a basis of heavy graphics that would give you an idea of what your rig is capable of.

If you’re after productivity and multimedia performance, these benchmarks will give you an idea of how fast the system performs using different benchmarking tools that reflect rendering times and productivity.